Now in its third consecutive record-breaking year, the KidsOut Question of Sport Leeds event raised a staggering £111,098 for disadvantaged children. Held on the 3rd of March at the illustrious Elland Road Stadium in Leeds, the evening was full of games and prizes, with Better Placed taking the championship title home as winners.

The evening opened with a champagne reception followed by a three-course meal served with wine. In addition to the main Question of Sport quiz, guests could participate in a raffle, play Spot the Ball, join in with Speed Bingo, or bid on exceptional auction prizes, including a week’s skiing holiday in Austria’s Chalet Sonne or training sessions with boxing world champions.

“Leeds is one of the biggest events of our year and always has a good atmosphere,” said Gordon Moulds, KidsOut CEO. “We owe a lot to all our supporters and the Leeds Committee for making it possible. Without their tireless work KidsOut would not be able to restore happiness to the tens of thousands of disadvantaged children we work with.”

KidsOut would like to extend special thanks to everyone who supported the event, particularly the KidsOut Leeds Committee and chair, as well as main supporter Burflex Scaffolding. 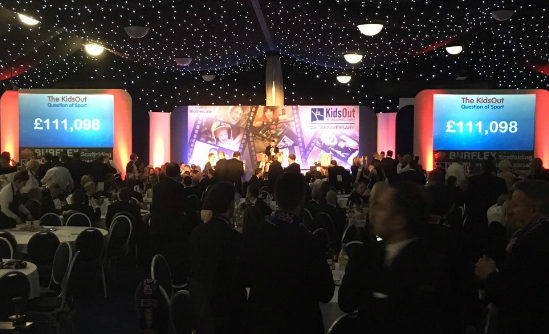