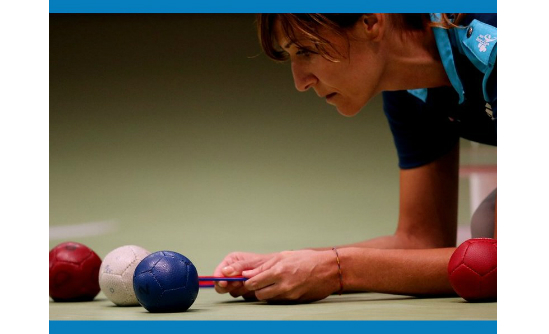 On the 17th September halow's activities team put on the first boccia session for our amazing young people at Guildford Spectrum Leisure Complex. Everyone had an amazing time but what exactly is boccia and why has it become so popular?

Boccia (pronounced bot-cha) is an individual, pair or team game similar to bowls and the French petanque. Originally a game designed for people diagnosed with cerebral palsy it became extremely popular and an official Paralympic sport in 1984. Boccia is practiced in at least 50 countries worldwide. It is a very fun sport that takes precision, patience and skill.

Played in a 12.5 × 6 m court the aim of the game is to throw leather balls, traditionally coloured red or blue, at a smaller white ball called a jack. The jack is thrown first and players take turns throwing their six balls as close to the jack as possible. Once the balls are thrown the referee will measure to see which are closest to the jack. You are rewarded a point for each ball that is closer to the jack then your opponents.

Usually six rounds are played and the team/person with the highest amount of points wins.

It was a wonderful evening of sport and we're very pleased so many people enjoyed themsleves. If you would like to join halow's boccia activity please email jason.b@halowproject.org.uk for more details.