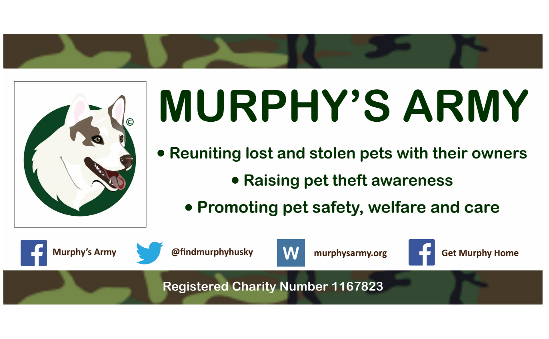 Murphy, a Siberian husky, went missing, believed stolen, in December 2014. His family were devastated and launched a social media campaign to help find him. The animal loving community took Murphy and his family to heart and in a very short space of time his plight was known not only across the UK, but worldwide. Thankfully Murphy was returned to his family some three months later, but the campaign did not stop there.

Our team, drawn together by Murphy’s absence, pledged to continue  their efforts and so Murphy’s Army was born. We have helped reunite many missing pets with their owners, raised much needed awareness of the increase in pet theft and helped many more pets in need.

Our extensive network of online support is managed through our Social Media pages Murphy’s Army  Get Murphy Home and  Team Murphy – together they give us a social reach of over 1 million supporters!

We hope you will support our cause, so that we in turn can continue to support the animals that need our help.