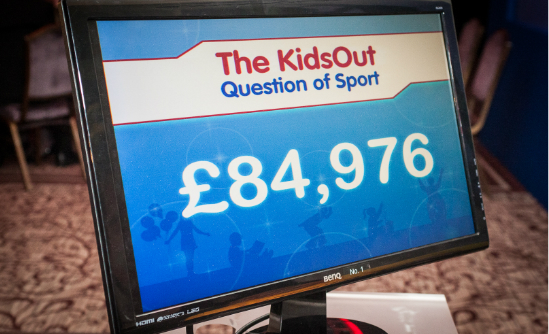 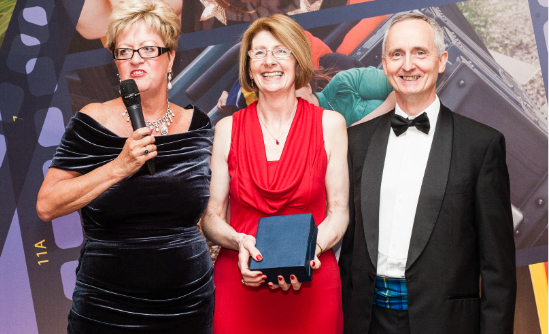 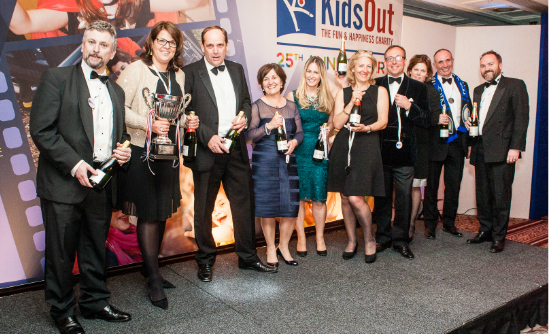 The London Question of Sport held at The Lancaster, London more than doubled last year’s fundraising figure with almost £85,000 raised on the night!

The event was hosted by Mike Osman who, with his extensive experience working as a radio presenter and entertainer, proved to be a highly talented host.  There was a heart-wrenching speech by Lynn, a mother from a women’s refuge with whom KidsOut has been working.  Lynn’s courage in relating her own highly personal story of the impact domestic violence can inflict on mothers and children touched everyone in the room and she was given a standing ovation as she left the stage.  On a more positive note, Lynn also explained the joy and happiness experienced by her and her young son from the KidsOut fun days and toy box which has enabled them to move on from the terrible situation in they had found themselves.

KidsOut chairman, Helen Pitcher, gave a fantastic speech about our amazing work.  Helen then presented a KidsOut “Outstanding Contribution Award” to Susan Dudley for her support to the charity.  The auction, hosted by professional auctioneer Edward Rising, offered a number of amazing prizes including a painting by Ben Mosely, which Ben actually completed during the event, sold for £4,500 and a holiday to Ibiza staying in a luxury villa and the use of a Sunseeker yacht which sold for an incredible £18,000.  Overall, the auction raised over £31,000 for KidsOut: thank you to everyone for their generosity.

After a hard-fought Question of Sport quiz, King and Spalding (playing as Inter Milan) took the Champion’s League Trophy with 3462 points.  The Europa League Trophy was won by Nick Child’s Team playing as Crystal Palace with a respectable 2700 points: Nick is a KidsOut Ambassador and long-term supporter of the charity.  The Higher and Lower competition reached an unconventional conclusion with the final six competitors checking their glasses of champagne to find who had the £1000 diamond in the bottom.

KidsOut would like to thank our exceptional hosts Mike Osman and Edward Rising, plus Ben Mosely for his fantastic painting and Sara Bellon from Broad Gallery who provided the other limited-edition artwork that was auctioned.  We would also like to extend our thanks to all committee members and guests for making the event an unprecedented success.  We look forward to seeing everyone next year: please follow our website, or subscribe to our Newsletter here, for the imminent announcement of the date.  If you can’t wait that long for another fabulous KidsOut event, why not join us at the 25th Anniversary Ball (also at The Lancaster, London) which will be held on 25th June 2015: tables can be booked at the link [www.kidsout.org.uk/ball].