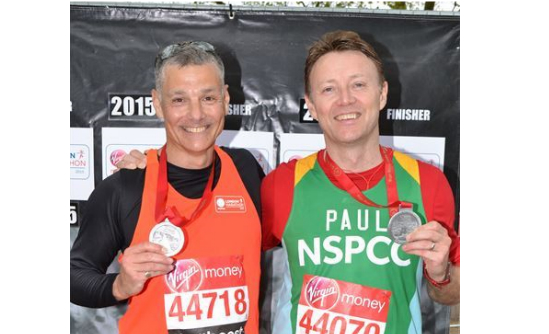 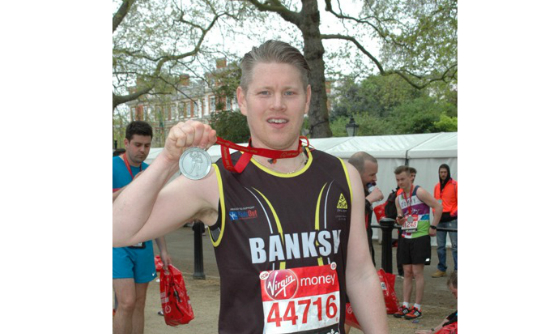 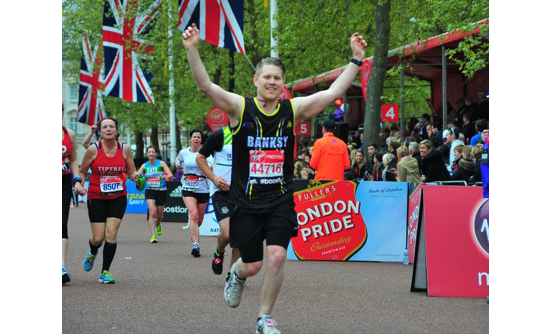 On Sunday thousands competed in the biggest ever London Marathon.  Among the 38,000 runners tackling the 26 mile 385 yard course from Blackheath to The Mall were two fantastic KidsOut supporters, Michael Banks and John Peters.

Running his very first marathon was Michael Banks.  Michael works for Diverze Print in Leighton Buzzard.  Not only does Diverze do nearly all of our printing for us, we are their nominated charity-of-choice, but Michael has undertaken this massive achievement and raised an astonishing £1690, smashing his original target of £1500.  You can still sponsor Michael and recognise his achievement of completing the course in 4 hours and 21 minutes, athttps://www.justgiving.com/BanksyMeUk/.  Michael commented:

“Taking part in the London Marathon is something I have wanted to do for a long time now, and I have tried for the past 5 years to gain a place via the ballot, but have not had any success.

One of my customers at work is KidsOut, a charity who aim to help disadvantaged children. They are a local charity to me, and while I was speaking to them one day it came to light that they have several places each year in the London Marathon, and still had a place to fill for the 2015 race. I saw this as my opportunity to take part in the event I have been wanting to run in, and also help a lot of children along the way. The rest, as they say, is history!

So, please help me to help as many children as possible by supporting my marathon journey, and to raise as much as possible for this fantastic local charity.”

John Peters has raised an incredible £7300 and counting! John came to the world's attention in January 1991, when as a POW in Gulf War I, his bruised and battered face flashed onto television screens around the world. He has written two best-selling books on his experiences and the documentary, 'Tornado Down' was Independent Documentary of the Year and a BAFTA Award Nominee. He has extensive international TV, radio, PR and media experience and has built up an international speaking reputation. John completed the race in 4 hours and 29 minutes, a fantastic achievement.  You can help John to raise even more for KidsOut at https://www.justgiving.com/John-Peters5. John commented:

“During my abusive time in an Iraqi prison, I had national support.  In contrast, many kids suffer in silence.  That is why I am Patron to KidsOut: to support such children.  So, I am going to subject myself to some pain and am running the London Marathon on April 26th this year.  Please sponsor me”

A huge thank-you for all the months and miles of effort put in by these two amazing supporters running for fun and happiness to disadvantaged children.  To take part in a sport event for KidsOut please get in touch by emailing Chelsea.birkby@kidsout.org.uk.