Sometimes the evidence is too hard to stomach 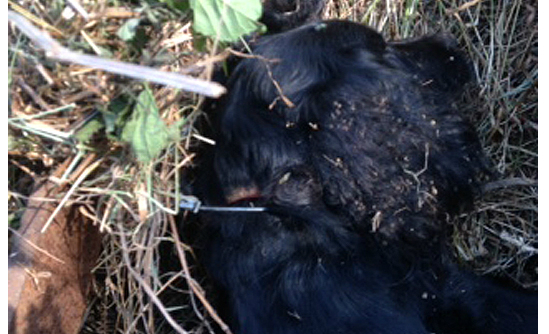 As a campaigner I'm often heard banging on about how important it is to have evidence to back up campaigns to strengthen our case for change for the better.

This week, I wish with all my heart that I hadn't seen the evidence, because to be honest, it was a bit too hard to stomach.

The evidence I'm talking about is poor Fern, a beautiful cocker spaniel and much loved family pet who was killed in a snare at the weekend. The images of Fern's lifeless body, tangled tightly in a thin wire noose will stay with me for a long time. As will the grief her family are suffering as they come to terms with the cruel way their pet was taken from them.

Seven year old Fern was found near to her home in Ridlington, Norfolk on Saturday afternoon strangled to death by a snare. The snare had been set on a bridge over a ditch in a field opposite her owners' home. Once trapped in the snare, the dog fell off the side of the ditch and was effectively hanged.

I can't even begin to imagine what it must feel like to find your pet in this way knowing how much they suffered in the last few moments of their life. Fern's owners told me how devastated they were by her death. Peter D'Amery said his family were "inconsolable by their loss". He described Fern as "much more than a pet" and said "she was part of our family".

Mr D'Amery described to me how him and his family felt about her death. He said: "I am absolutely devastated that Fern has been, in effect, murdered in such a cruel way. The snare was clearly intended to kill by the very nature of its position. Fern would have suffered a horrific death at the hands of a callous individual." He said he felt "responsible for not protecting her from such a horrible end. She was always around for me and in her last few minutes I was unable to return the kindness she showed to me."

Apart from the obvious sadness and sympathy I feel towards the D'Amery family, I feel anger that snares can be used freely, despite the horrific suffering they cause. Snares are deemed an acceptable way to trap wild animals which some perceive to be pests, such as foxes. Had Fern been a fox, the suffering would have been exactly the same - pain, stress, desperation, anxiety and ultimately a horrible death. This is why, in my opinion, snares are totally unacceptable. No animal should suffer in this way, whether it's a dog or a fox, or any other species for that matter. And, no family should have to suffer in the way the D'Amery family is suffering.

So what's the answer? It's simple, the easiest way to end this suffering is to ban snares. Make their manufacture, sale, use and possession illegal. The sad truth is that the main use for snares is to protect game birds being bred for shooting. Most snares are found on sporting estates which want to maintain large stocks of pheasants, grouse and other game birds for paying guns. It wouldn't be so bad if they were used to protect vulnerable animals for their own safety, but snares are only used to make sure there are more birds available for people who want to shoot them.

If like me, you are outraged by Fern's death, and the notion that this suffering  would be acceptable had Fern been a fox then join OneKind in campaigning to put an end the use of snares in all parts of the UK. You can report any incidents of snaring directly to our SnareWatch website and you will regularly find actions on our website to help with our campaign. Another way to support is to donate to us, to fund our important work in this area. Whatever you can do, however big or small, help us put a stop to snaring once and for all. We need to ban snares - it's that simple.