Children in Southampton treated as VIPs 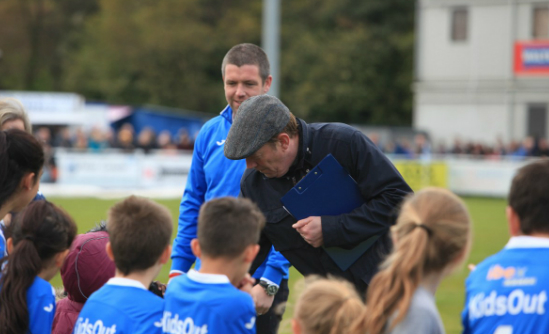 "The mothers told me they could not believe how fantastic the day was and it was amazing to see their children look so happy,” said Bernice, a local refuge worker. “They told me they would never have been able to afford a day like this for their children and are so appreciative.”

On the 23rd of April, 27 children and their mums attended an Eastleigh football match versus the Tranmere Rovers as VIP guests. Treated to lunch at the club house, face painting, their own football kit and special meet sessions with the Eastleigh players, the children came primarily from refuges in the Southampton and Hampshire area. Each was tasked with escorting a player onto the pitch, and then returned to special seats to watch the game.

“The children have all stated that they really enjoyed meeting the players and being able to walk out with them wearing their very own kit,” said Jane, a local refuge worker. “They loved the stadium and food, and described the day in one word: AMAZING!!!!!"

The match was attended by some 3,000 fans, with radio presenter and KidsOut supporter Mike Osman acting as compère at half-time.

The children’s VIP experience was made possible by KidsOut ambassador Glen O’Nion of Barratt & David Wilson Homes and Mike Mayock of Mackoy Ltd. The day was part of KidsOut’s Fun Days service, which works to give children living in refuge or with other disadvantages the opportunity to have fun and remember what it’s like to be children.

“My experience with KidsOut is one of great gratitude and positivity,” said Patricia, a local refuge worker. “It has been lovely to watch so many of the families having fun family time together as l know for many that has been their first time and this was only made possible by Fun Days. Thank you so very much from all our staff.”