Leading the Field in Equine Welfare 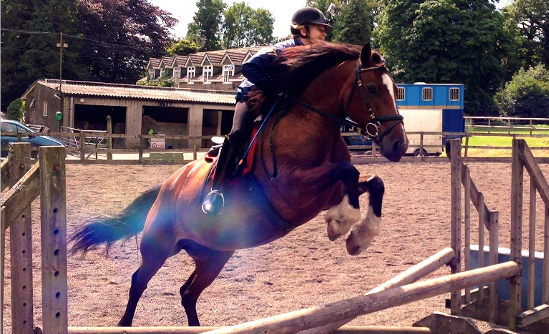 The Tidwell family fell in love with HAPPA Mille – a Wexford Cariadus when they came to visit our centre last year. Dave Tidwell, the father of eleven year old Maddie explains how it was love at for sight for her when she saw HAPPA Millie and that the two have been inseparable ever since!

“When we came to visit, I always remember Millie being very alert in her box and always watching what everyone else was up to. After my daughter had set her eyes on Millie, she insisted along with Mum, that we pop over to HAPPA to visit Millie every day, sometimes even twice a day! So what was just a simple ‘visit’ to see Millie soon turned into mumblings of ‘Dad, can we adopt her?’”

HAPPA Millie had a history of neglect and due to her being so physically strong and unpredictable we sadly felt that Maddison was far too young and small to handle her. Dave Tidwell agreed but determined Maddie was persistent in achieving her dream horse. Here at HAPPA, we could all see how much Maddison had a special fondness for Millie and so we warranted a trial ride in our school.

Millie was bouncy and excited and interested in absolutely everything else except schooling! She had a trot that was faster than a good canter for most others and was extremely strong! A typical Welsh Section D, full of ‘mare’ attitude and juvenile energy. But she was also bold, colourful and friendly.

“During the test-ride, Millie did a wonderful floating trot and was balanced and relaxed with her head down. Our first ride lasted 20 minutes in walk and trot but we were soon back for another test ride only a week later and then for another one only two weeks after that!” – Dave Tidwell

As the weeks progressed, we could all see that the bond between Maddie and Millie was growing stronger but we needed to be sure that HAPPA Millie was confident in the three paces before she could be rehomed. Our warranted test-rides benefitted both Millie and Maddie. HAPPA Millie was unfit; we really had to build up her stamina and fitness level. The Tidwell family were very patient and understanding and they visited the Centre for 3 months to continue test-riding. After that time period, it was so clear to us all that Mille and Maddie were a perfect match!

The Tidwell family took home HAPPA Millie and a little Shettie called HAPPA Jacko as a companion during summer 2012 and the two bonded immediately and have remained best friends! The family live in the Wye Valley where there are thousands of acres of forest and lots of lovely quiet walks to be enjoyed. Dave Tidwell explains that’s where HAPPA Millie’s training continued;

“I’d walk in front and Maddie and Millie would plod behind me. We did an average of 18 miles each weekend and often during the week when the weather and work allowed! This has an immediate impact! Just being with us, in the countryside but in a very calm and tranquil setting brought Millie down from her high energy ‘boil’ to a relaxed and confident horse. I set up a training ring in the paddock; this training gave her some balance and taught her to react to voice and subtle queues for walk and trot. She found it hard to canter, her front legs would be on the right rein and her back ones on the left, and I don’t know how she did it!”

The family progressed with the ring schooling and put trotting poles down to force Millie to watch her hooves and this helped her to become co-ordinated. Simple poles, a foot high were also put up to practise low jumping. Within 6 months Millie had made so much progress and was loving her new life with her new family!

“We also did ‘Parelli style games, teaching her that plastic bags, canvas sheets and whips are good things, not things to be scared of. One day I came home from work to find Millie in the field with Maddie. She was running and jumping over a broom on top of two buckets! Hands free, Millie was following and jumping the broom! I couldn’t believe what I was seeing! Maddie than ran off as fast as she could down into the corner of the field and Millie cantered after throwing her head and fly-kicking in joy! The two of them were and are inseparable!”

After a few months of bonding, light hacking, forest walk and occasional work in the paddock the family decided it was time for ‘formal schooling’ and by February 2013, Millie was being schooled nearly 3 times a week. HAPPA Millie has now been with the Tidwell family for over a year and as you can see, she has made so much progress, so much so that she even went on to participate in Summer Camp at the family’s local riding club. Maddie and Millie did 3 of them back to back, taking part in Cross Country, Dressage, Show-Jumping and a lot of Schooling. Millie is now regularly jumping 1 metre jumps with 1m spreads and now canters beautifully.

For the future, the family hope to have Millie involved in the local Pony Club.

“Millie is a brilliant all-rounder so we feel she will do well. She’s 6 now and ready to begin specialist work. We think Maddie and Millie will go down the jumping route. HAPPA Jacko enjoys doing his own thing, we allow him to roam the farm as he sees fit and if we do forest hacks he comes with us, he plods along with his little legs trying to keep up. We love them both to bits! We already have so many lovely and special memories with these two and we know that there will many more!”

Rehoming HAPPA Millie has also opened up the door again for Dave Tidwell who recently got back on a horse after being out of the saddle for 30years! This really has been such a successful rehoming story for HAPPA and the family and we are so thrilled that her new owners have continued with her training. HAPPA Millie has been given a second chance in life and we feel so happy and proud to have been able to give HAPPA Millie the opportunity to find such loving owners. She is a stunning horse who is beautiful in both form and nature. Our loan scheme enables certain HAPPA horses, ponies and donkeys to be placed with suitable borrowers under a legally binding agreement. These animals are inspected twice a year to ensure that the quality of care they receive meets HAPPA’s high standards.

There is a waiting list for ride able animals but as we try our best to match the right borrower to the right animal, not everyone has a long wait!

We are always looking for homes for a companion animal. Companion animals are equines that cannot be ridden for a particular reason. They may be too young, too old, or have a medical condition.