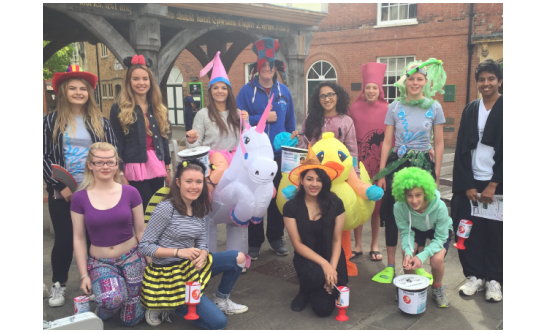 So 2016 saw The Y, team up (several times) with the young people who were on National Citizen Service. And boy… are we glad we did!

During the summer/autumn months, The Y were lucky enough to be the chosen charity for several groups involved in the NCS initiative. We went along to DeMontfort Uni and presented our charity, hoping for help with raising both awareness and funds. The NCS groups involved then made their choice as to which charity they would like to support, and The Y was lucky enough to be chosen four times in total.

Following our selection, the NCS team came to The Y for a week of planning. With young people making posters, calling local businesses for prizes, organising events, posting on social media etc etc, The Y became a hive of activity, and it was great! During their fourth and final week on the NCS program, the teams were crazy-busy accomplishing everything on their planning lists and more! We saw NCS groups selling cakes in Leicester train station, running bingo/ raffle/music/movie nights in our theatre space, taking part in sponsored sleep-outs, hosting coffee mornings, organising coin collections and much, much more!

NCS Results…
As a result of The Y teaming up with NCS, we managed to raise awareness of both The Y charity and the issues surrounding homelessness, to approximately 500 young people aged 16-18 and their families.

NCS managed to form some new relationships for The Y, with local retailers, by asking retailers to house The Y collection tins.

For us at The Y, over the course of NCS, we had the chance to work with around 60 young people directly, helping to organise and implement their chosen fundraising activities. And now, those 60 young people, through their time on NCS, have a much greater understanding of who The Y is and what we do!
NCS even created a buzz on social media attracting the likes of local MP Alberto Costa to tweet about them and the work they were doing with The Y ‘Well done to @NCS teams who volunteered & worked to support worthwhile causes this summer.’. Images of the group wearing The Y’s ‘Youth homelessness ends here in Leicestershire’ stamp T-shirts were also shared. Mr Costa also said, “The NCS is a wonderful programme that provides young people with skills and experience that will be valuable to them throughout their lives. It’s important to teach people the importance of giving back to the community whilst also developing their entrepreneurial skills through the range of money raising activities they organise”.

All this hard work paid off… And the young people involved in NCS raised £3977.14!