All Posts
Posted in Ask the Experts Lottery funding

Since its launch last October, has the Health Lottery been a good thing for the charity sector?

“Money raised through the Health Lottery, and distributed to us by People’s Health Trust, has enabled us to provide vital support at a grassroots level to some of our Network Partners, who would not otherwise have been able to access this level of funding.

“We’ve launched 31 projects that support more than 4,000 carers in communities across the whole of the UK. The projects focus on either young adult carers or older carers – two key groups of carers with specific individual needs that we’ve been able to tailor our support to.

“The People’s Health Trust’s focus on health issues ties in perfectly with our work, as caring can have a negative impact on carers own mental and physical health and wellbeing.

“And as well as helping us to extend our support to a greater number of carers, the partnership has enabled us to raise the wider profile of Carers Trust, which is invaluable for a charity of our size.”

“As the sole volunteer fundraiser for a small, rurally operating disabled/health charity, I would hope to say ‘yes’.

“However, upon reading the guideless for its current Active Communities Funding Programme, I’ve found that they do not support single-themed groups, preferring all-in-one community groups as their prime.

“This would seem to exclude groups representing, say, ethnic minorities or deprived children under the age of 10 – any special-themed group, in fact.

“For a funder that raises its funds from the public, parallel to the National Lottery, how shameful it is to exclude so many groups from applying – especially those representing people most in need. And yet I doubt whether they refuse to sell tickets to these excluded groups.

“Exclusionism only further marginalises those on the fringes of society. You could call it discrimination.”

“Yes. We are delighted that over £25 million of funding is going into local projects. This is new money at a time when it is needed the most.

As the distributor of this money, raised by 51 society lotteries through the Health Lottery, we have supported over 30,000 people and 400 projects – with many more to come.
Our funding is getting into neighbourhoods, addressing some of the most deep-rooted health inequalities. We are working with hundreds of small charities in these areas.

At the end of our first year, we have heard many stories of changed lives and, thanks to this new funding stream, we are likely to hear many more.”

My worry about the Health Lottery is simple: it does not pass on enough revenue to good causes. 28% of the National Lottery’s revenue is passed on to good causes, and other society lotteries such as those represented by the Hospice Lottery Association give as much as 50-60% of revenue. By contrast, the Health Lottery can only manage a measly 20% – the minimum required by law.

If this came on top of other lottery revenue to the sector, there might be less cause for concern. However, the Health Lottery’s marketing strategy clearly seeks to draw customers away from the National Lottery. Its advertisements draw direct comparisons between the two in an attempt to win over National Lottery players – a move which, if successful, will reduce revenue to the voluntary sector.

Lottery funding has created enormous opportunities for the third sector, and supported many charities through tough financial times. If the Health Lottery is successful in its current guise, that vital revenue will shrink. It should give more of its revenue to charity – at least matching the National Lottery, rather than undercutting it.

This article first appeared in The Fundraiser magazine, Issue 24, December 2012 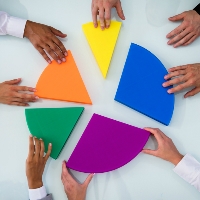 How can charities be encouraged to move into trading income?