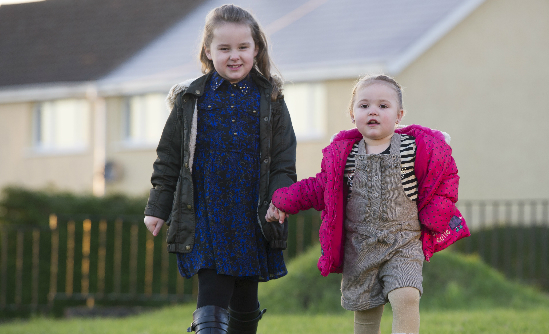 A Mum of two from Ebbw Vale is urging people to learn first aid – after her seven-year-old daughter had to treat her younger sister when she was having a fit.

Tasha Lloyd, 24, was driving back from a relative’s house one Sunday evening when her three-year-old daughter Sky became seriously unwell.

Tasha said, “Katelyn was also sitting in the back seat and shouted, “Mum, Sky’s not well!” I turned around to see Sky was having a fit and vomiting violently. I immediately panicked and pulled over to the side of the road, and got Sky out of her car seat.”

Luckily Katelyn had recently joined her local division of St John Cymru Wales and knew what to do. “Katelyn made sure that Sky’s airways were open and she wasn’t choking on her vomit and then continued pressing on her fingernail to keep her awake as she kept slipping into unconsciousness. Meanwhile I was panicking and crying as I quickly called for an ambulance.

“Thank goodness Katelyn was there. She knew exactly how to look after Sky, but not only that, she kept us both calm and reassured us until the ambulance arrived. The paramedics were astounded at how calmly Katelyn reacted.”

Sky was taken to hospital where it turned out she’d had a febrile convulsion, due to a high temperature from an ear infection. She made a full recovery.

Tasha said, “Katelyn had only been volunteering with St John for two weeks when Sky fell ill, but it just shows how quickly the information sinks in. I have since begun volunteering with the local division too and feel much more confident now that I have the skills needed in an emergency.”

Up to 140,000 people die each year in situations where first aid could have helped save their lives. This is as many as die from cancer.*

Des Morgan, who runs the Ebbw Vale division of St John Wales said, “We teach first aid to children as young as five and all our young members tend to pick up the first aid training very quickly, but it seems that Katelyn really took it on board.

“Katelyn’s experience shows that knowing what to do in those vital first minutes of an emergency situation could dramatically increase your chance of survival and I’m so pleased to hear that Sky was OK, thanks to Katelyn’s knowledge.”

St John Wales’ aim is have a first aider on every street in Wales.