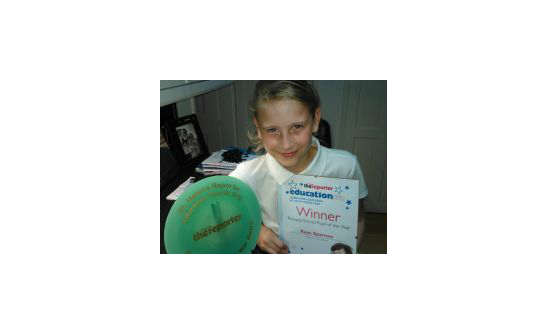 Ten- year-old Kaye Sparrow from Billinge, Wigan, with type 1 diabetes has received two prestigious awards for being an inspiration to other young people and in recognition of her fundraising efforts for JDRF.
Kaye won the St Helens Primary School Pupil of the Year award sponsored by the St Helens Reporter earlier this month. The Reporter praised her attitude saying she was inspirational for not letting a condition which makes everything she does just a little bit harder than for others get the better of her.

She also won the Good Citizen of the Year Award (Young Citizen category) sponsored by Liverpool John Moores University for turning the negativity which can surround type 1 diabetes into positivity, helping raise awareness of the condition and recognising all her hard work fundraising for JDRF.

We are thrilled that Kaye has won two awards and feel that she thoroughly deserves them. On behalf of JDRF she recently delivered an exceptional speech to raise awareness at our T1 Youth Ambassador Action Day to 150 children and attended our type 1 parliamentary event at Westminster earlier this year to speak to politicians and the media regarding the condition.

She truly is an inspiration and she should be very proud of her achievements – well done Kaye!

Kaye is also our Guest Editor for the latest T1 magazine. If you are not already on the mailing list for your child, you can sign up here.

Alternatively if your child wants to help raise awareness then signed up to be a T1 Youth Ambassador. See the JDRFT1 website for more information.