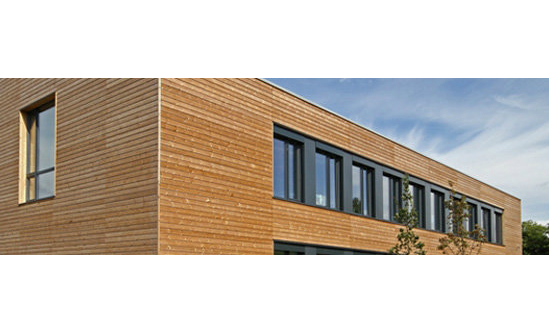 Back in 2009, we took the decision to build a new office in Leicestershire to the most exacting standards in energy efficiency i.e. to Passivhaus standard. Little did we know at the start of this venture that the outcome would exceed all expectations – achieving an almost unheard of Energy Performance Certificate of A . In fact one visit, Business Secretary Vince Cable described it as an ‘extraordinary building’.

To achieve Passivhaus standards we had to ignore traditional design ideas and focus entirely on reducing energy in use. This meant concentrating on limiting heat demand, limiting cooling demand, limiting primary energy use and achieving high levels of air tightness. However, whilst Passivhaus had been used for many residential properties there was little experience with larger floorplates and a consequent lack of Passivhaus accredited equipment and product suppliers in the UK, all of which made the project more challenging.

In the area of limiting heating demand, the following initiatives were taken in order to bring demand down to less than 15kWh/m2 per year: just 20% of the current building regulations.

With regards to limiting cooling demand, we did the following to bring the energy requirement down to less than 15kWh/m2 per year (again this figure represents just 20% of the allowance of the building regulations):

When it came to limiting primary energy use, the following measures were taken to bring use down to less than 120kWh/m2 per year:

Looking at securing high levels of air tightness, we undertook the following in order to achieve an air changes per hour rating of less than 0.44, which is around 12 times more airtight than the requirement of the building regulations:

During the build process there were many challenges. For example, there was no Passivhaus accredited mechanical heat recovery plant of sufficient size manufactured in the UK. No Passivhaus accredited triple glazed units were available in the UK. The Passivhaus accreditors insisted on a redesign of our traditional guttering bracket detailing in order to provide 300mm of insulation between the bracket and the internal face of the building. However, each challenge was met, and we are now enjoying an energy saving of £25,000 per year compared to our old office with the added benefit of a further saving from the CRC (Carbon Reduction Commitment) tariff.

The new office is bright, efficient and provides a comfortable working environment, even with the extremes in external temperature experienced since its first occupation. At the time of writing, approximately 1200 construction professionals and clients have visited the office to learn more about it.

Following the first 12 months in occupation we were delighted to have achieved a negative energy cost after we took into account the benefit derived from the PVs equating to £1,500. The additional unexpected benefit is that we have seen a 13% reduction in staff sickness compared to our old office, which we attribute to the air being constantly changed, thereby removing any infections rapidly out of the building. The building’s EPC of A -2 has generated much comment and we believe this is probably the best achieved to date in the UK.

We have now completed the construction of two Primary schools built to Passivhaus standards –Richmond Hill and Swillington – both in Leeds and we are currently building a new hospital employing most of the Passivhaus principles appropriate for inclusion in a hospital. Several other similar schemes are at an advanced stage of design for offices and also a science park.