How Neil proved that he is the best man 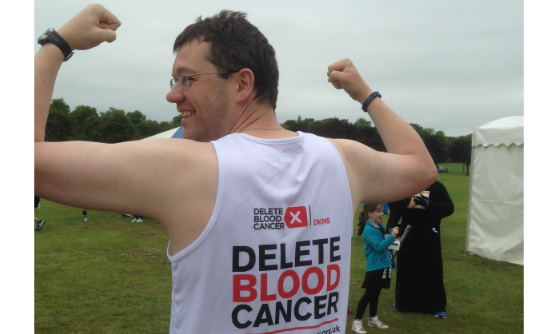 When Paul Margiotta chose Neil Galbally to be the best man at his wedding, he had no idea what a support he would prove to be several years laterwhen he discovered that he had Myelodysplastic Syndromes and would require a blood stem cell donation.

After Paul was diagnosed, Neil wanted to do something to show his support for his childhood friend, and to raise money for Delete Blood Cancer UK and awareness of blood stem cell donation. He decided that the Men’s Health Forum Scotland, a 10k race would be the perfect opportunity to challenge himself physically and to ask people to donate money for.

The race took place last week in Glasgow’s Bellahouston Park and Neil completed it successfully. He also raised over a thousand pounds so far, and the donations are continuing to flood in. A large number of his friends and colleagues have registered as potential donors too!

Everyone at Delete Blood Cancer UK would like to congratulate Neil on his fantastic achievement and thank him for raising money for the charity and awareness of blood stem cell donation. However, the biggest congratulations comes from Paul, who says of Neil’s great endeavour: “I just want to say, how proud I am of Neil and the money he raised.”

If you have been inspired by Neil’s story, you can make a donation on his fundraising page:http://uk.virginmoneygiving.com/neilgalbally