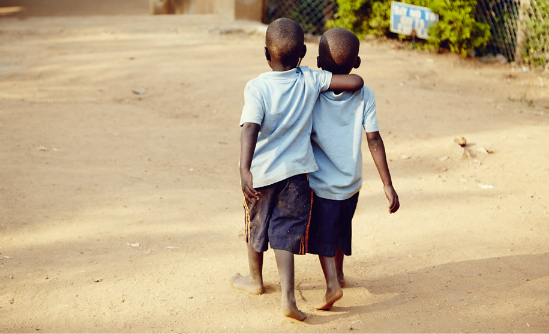 Yesterday Bex was standing by the school gate when two young boys turned up and stared at her through the bars. She asked them what they wanted and they said they’d come to see their brother. She asked who their brother was and they told me “Peter, in P3”.

“And why do you want to see Peter in P3?” she asked.
“Mummy told us to come and get him” the older one said.
“And why does mummy want Peter?” I asked, trying not to get impatient.
“Because our other brother is dead.”
His face started to tremble and tears toppled over on to his cheeks. The younger boy just stood their silently staring at the ground and shuffling his feet.

Bex takes up the story…

It’s amazing how quickly impatience can turn to heart-breaking sympathy. I took them down to our welfare office and asked Pius (one of our social workers) to go and find Peter in P3. I sat the two boys down whilst we waited.  I found out that they were brothers aged 13 and 12 (although they looked very small for their age) and that brother number three (aged 11) had died that morning after being admitted to the local hospital for the last month. The older brother wept quietly whilst trying to answer my questions. The younger brother sat in awkward silence, not seeming to know what to do with himself.

Peter (aged 8 but looking much younger) arrived. He took one look at his older brothers and then walked to the corner of the office and stared at the wall. He put one hand on his hip and the other on his face with his back to us. After what seemed like an eternity (but was probably only 15 seconds) I called Peter over and he came and stood next to where I was seated. He kept his hands by his sides whilst silent tears dripped down his face. I figured he’d worked out what had happened but I needed to make sure.

“Peter, do you understand why your brothers are here?”
Peter nodded silently.
“Peter, I’m so sorry but your other brother, who has been in hospital for the last month, has died this morning.”
More silent nodding and tears.
“Mummy has sent your brothers to come and get you, so Uncle Pius is going to walk home with you all. Is that okay?”
Silent nodding.

So after a bit more reassurance and condolences they all shuffled off with Pius. I turned to look at Grace (our welfare manager), and she gave me a gloomy smile and said “That’s so sad.” And then turned around and got on with her work.

All the other staff I told this story today had the exact same reaction: a sad smile, a shrug of the shoulders … and then moved on. And that’s what’s it’s like here. When a child dies, there should be outrage, there should be a sense of injustice, there should be shock, there should be weeping and gnashing of teeth. Not quiet resignation. Not “Oh well”. The air should not be heavy with an unspoken “that’s how it is here”. Now, I don’t blame my staff for having that reaction. You see, they’ve lived surrounded by death their whole lives. I’ve lived here for ten years now and the disconnect between my reaction and those around me is still jarring.

I’m sitting at home and typing this and I can’t get those three boys’ faces out of my head. Surely in this day and age, Africa should expect her children to live, shouldn’t she? And if not, why not? Why should we be able to shrug our shoulders at the death of a child in a developing country? God help us to make this world a fairer place where every community can expect their children to reach adulthood.

Incidentally, the boys’ dad died last year and their mum’s been struggling ever since. She’s around age 30, on our IGA scheme and is bringing up 12 children on her own (eight are hers and four are for someone else). We’re stepping in to help with the burial costs.